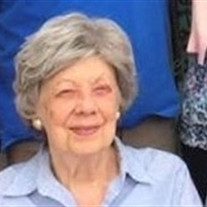 Betty entered the gates of Heaven on August 26, 2019, surrounded by family, as a visiting chaplain sang that well-known hymn "How Great Thou Art." She was 91 years of age. Betty was born, in Springfield, MO on August 25, 1928. Her parents were William L. and Betty N. Payne. She graduated from Westport High School in Kansas City, MO. In 1947, she married Walter L. Pearson and that marriage ended with his accidental death in 1956. In 1959 she began her 60-year marriage to Robert H. Badgley. She spent many years in Johnson County, Kansas, living in Mission, Prairie Village, Leawood and Overland Park. Also during the period 1965 to 1982, she lived in Cincinnati, OH, Hillsdale, NJ and Glen Mills, PA. Glen Mills is a suburb of Philadelphia where she taught decorative painting classes and also was active in the Nation's Bi-Centennial celebration in 1976. She was very active in decorative painting and was past president of the Heart of America chapter of the National Society of Tole and Decorative Painters. She has 2 painted Christmas tree ornaments in the Smithsonian Institution. In 2004, in connection with other painters in the Society, she had a hand painted Christmas tree ornament accepted by the White House and placed on the Christmas tree in the Blue Room. As a result she, along with other painters, was invited to a reception at the White House which she and her husband attended and had their picture taken with the First Lady, Laura Bush. Betty enjoyed playing bridge and league bowling and was a Bronze Life Master Bridge player. Also, she consistently carried a bowling average of 155. She was also a strong fan of ragtime music and the Kansas City Royals baseball team. Betty has enjoyed a very active life - one where she had a very positive influence on those with whom she was associated. Betty was pre-deceased by her parents, son Stephen K. Pearson and brother William L. Payne, Jr. Surviving are her husband Robert, son Jeffrey W. Pearson (Ann) of Anaheim Hills, CA, daughter, Ellen Badgley Zibell (Ted) of Fort Collins, CO and step brother, Eugene Schnake of Olathe, KS, 4 grandchildren and 3 great grandchildren. A celebration of her life will take place at 2:00 p.m. on September 10 at The Lodge of the grounds of MacKenzie Place in Fort Collins, CO. After cremation, Betty's ashes will be interred at Johnson County Memorial Gardens in Overland Park, KS. The family expresses its gratitude to the Columbine Health Systems' Lemay Avenue Health & Rehab Facility in Fort Collins and Pathways Hospice who were of so much assistance to Betty and her family.

Betty entered the gates of Heaven on August 26, 2019, surrounded by family, as a visiting chaplain sang that well-known hymn "How Great Thou Art." She was 91 years of age. Betty was born, in Springfield, MO on August 25, 1928. Her parents were... View Obituary & Service Information

The family of Betty P. Badgley created this Life Tributes page to make it easy to share your memories.

Send flowers to the Badgley family.