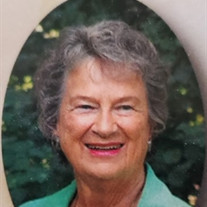 Beryl “Brownie” Byrom McGraw died peacefully on Monday, March 30, 2020 of natural causes following a courageous five and a half-year battle from complications after a massive stroke. Brownie was born on August 16, 1930 in Pittsburgh, PA to Bernice and Edward Byrom. As a child, Brownie and her mother moved across the country living in many different cities. Her first job at eight years old was handing out donuts for the Red Cross during the war effort. As a teenager, Brownie moved to Denver, CO and attended Maury Junior High School. She later graduated from East High School where she excelled in academics and lettered in three sports. As a Denver East Angel alum, she began her lifelong affinity for collecting angels. Brownie went on to attend Colorado A&M (now Colorado State University), where she earned her bachelor’s degree in social science, a teacher certification, administration certification, and master’s degree in education. She was a member of the Gamma Phi Beta sorority and kept many of these friends throughout her life. Colorado A&M was where she met the love of her life, Thurman “Fum” McGraw. They were married in Denver Colo. On December 17, 1950, and eventually settled in Fort Collins where they raised their three children, Dave, Mike and Debbie. Brownie and Fum loved entertaining – whether it be at their home in Fort Collins, their summer home at Red Feather Lakes or the family ranch in the Laramie River Valley. Their faith was strong and St. Luke’s Episcopal Church was a large part of their life – they played an instrumental role in the construction of the 2000 Stover Street building. On Sundays, friends and family would gather at the McGraw’s for coffee and donuts – a tradition that continued on through the years and in the family. Thanksgiving was always a special and favorite holiday where the entire McGraw clan would gather every year at Fum and Brownie’s. Among Brownie’s greatest joys were her family, traveling, and of course her beloved dogs. Mexico was her favorite destination, where she would often be joined by family and friends throughout her three week beach vacation every year. Brownie loved to read, and she enjoyed staying active with things like golf, tennis and swimming. Brownie had a strong social connection, belonging to two book clubs, bridge club of 60+ years, PEO, travel club, supper club, and the CSU Ram Club. She loved all athletics, and especially loved cheering on her Rams (and was also vocal about her dislike for bad referees). Through all of these connections, Brownie made friendships along the way that have lasted a lifetime – people she has always cherished, and memories she’s held close. Anyone who knew Brownie knew the extent to which she contributed to the Fort Collins community – proudly serving on several boards and committees, and receiving many honors. There are too many to name specifically, but the following are a few that she held dear to her heart: Inspiration Playground, The Center for Family Outreach, PVHS Foundation, Pathways Hospice, Griffin Foundation Scholarship, Discovery Center, Fort Collins Boys and Girls Club, UCHealth Cancer Center, and MCR Foundation boards. Her community service roles and recognitions are many, but notable among them are Annual Mayors Award, Max Getts Award, Woman of Distinction Award, Spirit of Fort Collins Award, MS Hope Award, Fort Collins Lamplighter Award, Zonta Legacy Notable Women honor, CSU Distinguished Alumni Award, Who’s Who of American Professional Women honor, UCHealth Illuminator Award, and the National Western Stock Show’s Citizen of the West Honor she so proudly received with Fum. Brownie served in several leadership positions within Poudre School District, including teaching at Wellington and Blevins Junior High, as well as serving as dean of students at Blevins Junior High. She was also dean of students, assistant principal and principal at Rocky Mountain High School, and continued her career as principal at Lincoln Junior High School. Brownie was the first woman principal of secondary education in the Poudre School District. Because of her extensive service to PSD, McGraw Elementary School was named in her honor. Upon retiring from PSD, she took a position at the District Attorney’s office as a juvenile specialist for 20 years, where she retired for the second time at 80 years old. Brownie is survived by her three children, Dave McGraw (Patti) of Wellington, CO; Mike McGraw of Hanna, WY; and Debbie Hansen (Carl) of Livermore, CO; her grandchildren, Sean McGraw (Emily), Tara McGraw, Shane McGraw, Conor McGraw, Lisa Hansen and Katie Hansen; and two great grandchildren, Eli and Acey McGraw; as well as several nieces and nephews. “Gratitude is the memory of the heart…and the heart never forgets.” With great love and gratitude, Brownie’s family would like to thank all of those who have supported and loved mom throughout this time. Thank you for all the prayers, thoughts, kindness, flowers, cards, visits and friendship. A thank you from the bottom of our hearts for the care she has received from Columbine Health Systems Centre Health and Rehab staff, the incredible team from Halcyon Hospice, and for the comfort dogs that have visited regularly to bring a smile to her face. We will miss mom’s (Grandma Graw) infectious smile and laugh, wittiness, fun-loving sense of humor, and kind heart. Due to current circumstances and restrictions, there will not be a Celebration of Life service for Brownie. Please remember and celebrate her in your own way --- by doing something kind for yourself or for someone else. In her memory, donations can be made to: Thurman F. “Fum” and Beryl B. “Brownie” McGraw Memorial Scholarship at Colorado State University Athletics, UCHealth Northern Colorado Foundation, or Saint Luke’s Episcopal Church, in care of Bohlender Funeral Chapel, at 121 West Olive Street, Fort Collins, CO 80524.

The family of Beryl B McGraw created this Life Tributes page to make it easy to share your memories.

Send flowers to the McGraw family.