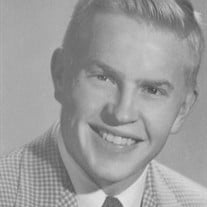 Arnold Torgerson, Jr. of Fort Collins, Colorado—known to his many friends as “Tommy” and many more as “Coach”, and still more as “Torgy”—passed away peacefully and unexpectedly at home on April 6, 2020; at the age of 88 years. Born in Denver, Colorado on November 20, 1931; Torgy attended South Denver High School, earned his Bachelor’s Degree in Mathematics at the University of Colorado, and his Master’s Degree at Colorado State University. A devoted teacher and impassioned athletics coach, Torgy worked at Delta High School from 1950 – 1957 and Fort Collins High School from 1957 – 1987. He proudly served as Director of the Colorado High School Coaches Association and Director of the Colorado All-State Games from 1987 – 2003. He was inducted into the National Wrestling Hall of Fame in 2003 for Lifetime Achievement, and served as President of the Colorado Chapter of the National Wrestling Hall of Fame. Torgy continued to volunteer his time and experience for a wide variety of athletic and social events throughout his life. The last such event being the annual 2020 Fort Collins High School “Arnold Torgerson Invitational Wrestling Tournament”. Torgy was preceded in death by his parents Arnold Sr. and Mary (Wallace) Torgerson, and beloved wife, Barbara “Bobbie” who he married in September, 1951. He is survived by their six children: Linda (Dion) Gonzales in Kona, Hawaii, Steve (Laurie Enright) Torgerson in San Luis Obispo, California, Debra (Salvatore) Capra in Arvada, Colorado, Jeff (Doreen) Torgerson in Norman, Oklahoma, Laura “Lola” (Manny Fimbres) Torgerson in La Paz, Mexico, and Annette (Frank) Torgerson-Anderson in Boise, Idaho. He will also be dearly missed by his six grandchildren: Landon and Sheridan Torgerson, Jenna and Anthony Capra, and Brian and Christina Anderson. Torgy is also survived by his loving Sister, Arlene Drewes in Annapolis, Maryland, and her 3 daughters, Kristy, Katrina and Karen. As per his wishes, Torgy will be cremated. A memorial celebration of his life will be scheduled at a future date, determined appropriate to gather in celebration. In lieu of flowers, a future donation to a proposed Arnold Torgerson memorial scholarship fund would be appreciated.

The family of Arnold Torgerson, Jr. created this Life Tributes page to make it easy to share your memories.

Arnold Torgerson, Jr. of Fort Collins, Colorado—known to his...