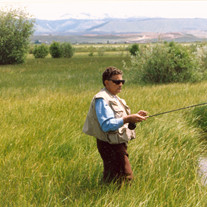 Al Dyer, born August 30, 1938 - died January 20, 2021 With a heart as big as a mountain he is hero to a very large family. He is survived by his wife Carol Dyer, 4 children; Terri Schaeffer, Tracy Bordewyk, Trisha Morris and Mike Dyer, 21 grandchildren, 13 great grandchildren. He and Carol were High School sweethearts married right after Carol graduated from high school and remained married for 62 years. He played football in high school and passed his passion for that sport on to his son and grandsons. He started College and a family right out of high school family. He and Carol worked very hard in those early years putting him through school all the while raising four children. He started his career in 1971 as a professor in the then Forestry College. Soon after he became Department Head, rising to become the Dean of the Forestry College (now called College of Natural Resources). He served as Interum for the President of CSU and was in the Vice President position for a short time returning to the College of Forestry from where he retired. He was fun, loving, and patient. Al filled his house with laughter and music. He listened to every genre of music and kept up with his graduate students on the latest trends. His students loved him and came over to our house regularly, some of them even went on the family camping trips. Early in his teaching career some of his students left a box on our doorstep and ran. It was a box of baby ducks! I am sure they were laughing pretty hard thinking about this dad with his 4 young children begging to keep them! He dedicated his life to Jesus at age 36 after studying every major religion in comparison to Christianity and concluded that the God of the Bible was unquestionably real then never waivered in his faith after that. He was incredibly wise, and had a lot of insight. His children feel one of his greatest gifts to them was the gift of a believing parent, as he led the way to Jesus along with Carol. His consistent devotion to studying the scriptures and fellowship with other believers was profoundly influential on his children. He cherished each of his four children and showed them along with Mom how to love unconditionally and think logically and live practically. His favorite author was C.S. Lewis, although he really enjoyed J.R.R. Tolkien. He was always bringing great literature home. He made sure his children and later in life his grandchildren read profusely; especially Chronicles of Narnia - a timeless allegorical story of the Christian walk, Watership Down, a fun story and of course the Hobbit and Lord of the Rings - an epic story of good and evil, with good prevailing in the end as it does in the Bible. . He came home from a hunt with the most beautiful goose he had just shot. Upon seeing it, one child who had just read Jonathan Livingstone Seagull ran crying from the room exclaiming, “You might have just shot Jonathan Livingstone Seagull". He quit hunting after that. The the dog being too old to go with him might have played into that too, but because he also hunted in his childhood (he was that iconic kid running around barefoot in the summer, in his overalls with a gun on his shoulder in the Northern California mountains) and during the early years of marriage out of the need to put food on the table, and perhaps that was just the time to be done hunting for him as the need was no longer there. One of his best stories was how he was lying in bed with his gun, pretending he was duck hunting. He said he saw a duck and followed it with his gun across its path flight in the window. Without thinking he aimed, shot and BAM! His mom came running to find a big hole in her house just past the window in the corner of his room. He will be sorely missed and it is hard to imagine life without him, but bis family has great peace knowing he trusted Jesus for salvation and is now dancing on the streets that are golden. A Memorial Service will be held Wednesday, January 27, 2021 at 11 a.m. at Immanuel Christian Reformed Church, 1900 S. Taft Hill Rd. You may view the live stream of the service at https://www.youtube.com/channel/UCn45dexkzL1AspFTs13iSWg

Al Dyer, born August 30, 1938 - died January 20, 2021 With a heart as big as a mountain he is hero to a very large family. He is survived by his wife Carol Dyer, 4 children; Terri Schaeffer, Tracy Bordewyk, Trisha Morris and Mike Dyer, 21... View Obituary & Service Information

The family of Archie Allen Dyer created this Life Tributes page to make it easy to share your memories.

Send flowers to the Dyer family.