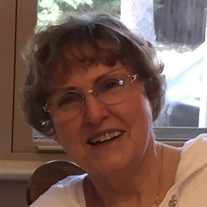 April Nadine Manifold passed away on October 14, 2021. April was born April Nadine Lantrip on April 5, 1940 in McCloud, California. She grew up mostly in the Arcata, California area graduating from Arcata High School in 1958. April loved animals and growing up she saved her own money to buy a special horse by the name of Rocky. Rocky provided much fun and love for April. She met her husband, David E Manifold on a blind date as a senior in high school. After a short courtship they wed on July 20, 1958. April became a young mother with the birth of her first child, David Ray on September 4, 1959. Their second child, Julie Lynette, was born on August 3, 1962. She was a homemaker and business partner with her husband during their 62 years of marriage. They owned and operated Manifold’s Texaco and then Eureka-Humboldt Fire Extinguisher Company. After retirement they followed their daughter moving to Fort Collins, Colorado. She was a supportive wife, caring mother, and active member of her community. She led her daughter’s Bluebird/Campfire Girl group for several years in her home, having a positive impact on many of her daughter's young friends. She was an active member of Delta Epsilon Sorority, Arcata Soroptimist, serving twice as president, Arcata Chamber of Commerce, and Windsor Kiwanis. She was a talented artist who got back into painting with watercolors in her later years. She loved to bake and tend to her flowers. Her apple pies were legendary among friends along with her chocolate chip cookies and banana bread. When her kids were younger she was not afraid to pack them up and take them camping or on a vacation by herself. At Christmas time she always made something new to decorate her home. Her home was always welcoming and comfortable. The light of her life was her only grandson, John David. She cared for him regularly before he started school and continued to be a big part of his life until her passing. They had a very special relationship. She was also her husband David’s main caregiver for the past 15+ years until she passed. She continually demonstrated patience, caring, and selflessness in her time as his caregiver. April is survived by her husband David, daughter and husband, Julie and Andrew Dokoupil and grandson, John David. Her sister/best friend and husband, Terry and Bob Weir. Her nephews William Carter (Cathy Hazel) and Rob Korb (Rachel) and their families. She was preceded in death by her parents and son David Ray Manifold. A memorial service will be held at a later date. Memorial contributions can be made to the charity of your choice.

The family of April N Manifold created this Life Tributes page to make it easy to share your memories.

Send flowers to the Manifold family.