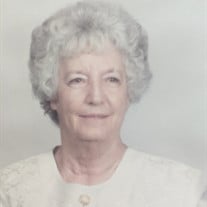 Anna Marie VanValkenburg Hanson “Anna Dee” was born in Spicer, Colorado January 2, 1924, to Edward VanValkenburg and Annie VanValkenburg (Fetcenko), one of seven siblings. She graduated from North Park High School in 1943. Anna Dee married Donald Hanson in 1947, after two weeks of courtship. Don preceded her in death in 1981. She was a housewife and mother, famous in town for her homemade cinnamon rolls. Anna Dee ran the Stitching Post sewing shop in Walden, CO for several years. She was a member of the Rebeccas, the Cow Belles and the VFW Auxiliary Club. Anna Dee was an exceptional seamstress and cook, she hiked and fished, she rode horses and eventually loved riding her bike after learning how at 40 years old. She was sought out by all who knew her, not only as a cunning opponent in any card game, but as a source of unending wisdom, friendship and love. Anna Dee is preceded in death by her sisters Pearl Easthouse and Betsy Wyatt, by her brother Eddie VanValkenburg, and her daughter-in-law Gwendolyn Hanson. She is survived by her siblings Bill VanValkenburg, Pete VanValkenburg and Helen Hughes, her five sons, Kent (Joyce), Kirk (Gwen), Kelly (Valerie), Kevin (Darcy) and Kale (Melody), 17 grandchildren, and 16 great-grandchildren. She was loved dearly by family and friends and she will always be missed. The memorial service will be held at a later date. In lieu of flowers, please donate to the Disabled American Veterans or the charity of your choice in memory of Anna Dee and Don Hanson.

The family of Anna Hanson created this Life Tributes page to make it easy to share your memories.

Send flowers to the Hanson family.