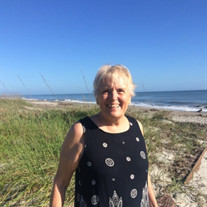 Tory Fravel, age 78, peacefully passed away with her family by her side, at Poudre Valley Hospital. Diagnosed on February 2, she left us after an abrupt and difficult battle with lung and uterine cancer. Tory is survived by her adored daughters Donna (Uwe) and Angie (Glenn), her grandchildren, Chris (Leslie), Dustin, (SO Danielle), Brayden and Torren, great-grandchildren Caleb and Carissa, brothers Ralph (Nancy) and John (widowed Annie) and numerous nieces and nephews. She was preceded in death by her mother Annie, father Thoren, Dad Bob, and daughter, Wendy. Tory’s adventures began in Santa Rosa, CA and expanded world-wide.… She married all of her real sweethearts and even had children with a couple of them. She told others that her “picker” was broke and refrained from marrying again. Instead she poured that love into everybody who crossed her path. Tory was a grateful member of Alcoholics Anonymous. Tory lived many lifetimes in her 78 years. She guided others: Whatever you do, have no reservations… Play Absolutely. Work Absolutely. Heal Absolutely. Love Absolutely. She changed vocations, following her heart. • • Governess (or terrorist according to her little brothers (inventor of “Smart Pills” includes rabbit droppings and no-longer-melted chocolate) • Comedian • House Manager Extraordinaire (Housewife was not adequate enough to describe her role) • Seamstress • Health Care Industry – transcriptionist, writer of safety manuals, Managed OSHA regulations, Hospice Nurse, etc. As a CPR instructor, she buckled recessive Annie in the passenger seat so as to utilize the carpool lane legally… • Owner of Tory’s Salsa • Kitchen Witch • Freelance Writer (officially in Jamaica and most recently at the Sanctuary, Fort Collins, CO) • Safety and Health Manager (Santa Rosa, CA & Manager Sheppard- Miller and TetraTech Fort Collins, CO) • Sponsor (everywhere) • Travel Agent (Santa Rosa, Cocoa Beach, San Francisco) • Vice Chairman/Director of the Women’s Inc. Crisis Center (Montego Bay, Jamaica) • Officer’s Club Manager (Manheim, Germany) • Restaurant Manager (Jamaica & Seattle, WA) • Private Investigator (Seattle, WA & dabbled everywhere) • Fiber Artist • Lamination Queen What seems ordinary, like breathing, can be extraordinary and she was only ill for the past 4 months. However, no matter the struggle, she brightened others with her rays of love. She felt blessed to receive the medical care she experienced prior to and after her cancer at the UC Health Cancer Center, the Radiation Oncology unit, all of her doctors, nurses of old and new. She even flirted with the paramedics. “Have you met my friend/family member” she would say. She’s my rock.” Every hardship she experienced strengthened her into a rock for others. She was a sassy, spiritual force of nature that believed passionately in the power of the elements, and spread hope like fairy dust. She’d much rather ask forgiveness than ask permission. When trouble came her way, she winked… The answer is always “no” unless you ask! “I’ve been looking all over the house for the filter she was missing… but she dropped that like a rock.” She believed in Letting Go and Letting God. She would want us all to carry the message… She might also add, “love you the most. the end. I win.” Bleating Goat! Her passing became a sigh of relief for all who watched her light, on this plane, grow weak. Breathe joyously. Please sign the online guest list, send a favorite memory via email or Facebook or bring it with you! “See you Later Gathering” Open House Style Tory’s Fairy Hut, 3627 Kunz Court, Unit F 1:00PM to 3:00PM, Thursday, June 24, *During the full moon… and Tory’s Salsa included! A private family ceremony is in the works.

Tory Fravel, age 78, peacefully passed away with her family by her side, at Poudre Valley Hospital. Diagnosed on February 2, she left us after an abrupt and difficult battle with lung and uterine cancer. Tory is survived by her adored daughters... View Obituary & Service Information

The family of Anna Thoreen "Tory" Fravel created this Life Tributes page to make it easy to share your memories.

Tory Fravel, age 78, peacefully passed away with her family by...

Send flowers to the Fravel family.